In June 2000, a courageous 12-year-old family member disclosed to me that my then-husband had been sexually abusing her for years. Since then, based on my experiences and years of research, I’ve written elsewhere about how Christian communities can fail abuse victims/survivors and their families, causing more hurt and harm when they should be providing support. In fact, I recently learned the term “Double Abuse”. This is the phrase The Mend Project uses to describe the re-victimization caused by spiritual and therapeutic authorities in the wake of abuse disclosures and trauma.

Thankfully, in my experience, not every Christian responded harmfully. In fact, there were a number of ministers that responded in healthy supportive ways.

Here’s a list of 3 things my ministers did right in response to our trauma:

1. They listened and believed

It is common in our culture to distrust those who disclose abuse, particularly sexual abuse. The language we use reflects this.

When my minister met with me to discuss the abuse disclosure, he listened to what I said, and he believed me. He believed the 12-year-old’s disclosure. Our experiences held value for him.

He did not use words that implied that she or I could have been lying or mistaken. He never called the abuse “alleged” and he never called the disclosure an “accusation.” These words, commonly thrown about in the wake of disclosures are weighted. They imply to victims and their loved ones that they are suspect and that they are not fully believed.

Now I am not saying that every abuse disclosure is true. However, every single disclosure needs to be investigated fully by skilled authorities. And during this process, the victims/survivors need to be treated with empathy, as victim/survivors, not as “accusers.”

It is imperative to know how few children actually disclose abuse at all. Dr. Anna C. Salter, an expert in treating both victims and predators, states, “Regardless of the reason, the fact seems undeniable. It is only a minority of children who disclose abuse at the time.” If we respond with disbelief, shame, minimization or blame, that child will not risk disclosing again. The effects of this are devastating, partly because it affirms to the child that their abuser is invulnerable and it shows the predator that they can abuse with impunity.

I know it’s easier to believe that there was some kind of mistake or misunderstanding rather than believe someone known and trusted could violate someone intentionally. And yet, the statistics indicate that domestic violence and sexual abuse are common, while false accusations are rare and misunderstood.

2. They explained our legal obligations and the options available

Ministers need to be knowledgeable about the mandatory legal obligations they are required to adhere to.

My minister explained to me what we were required to do legally according to our state laws. Basically, we needed to report the disclosure and turn the abuser into the police.

However, he provided options for how we could do this. This is vitally important when interacting with those who have experienced abuse. Abusers work diligently to attack their victim’s wills. They seek to destroy the ability to choose by using control. My own capacity to make choices had been eroded by my then-husband for years, and my feelings of powerlessness were all encompassing.

My minister offered three ways we could handle informing the police. Then he talked me through my feelings to figure out which option I was most comfortable with. So simple, and yet it had a lasting impact.

3. They understood abuse and its impact

In order for my minister to know that offering choices was healing, he had to have an understanding of the dynamics of abuse and the impact of abuse. Another way he indicated his understanding of abuse was how he reacted whenever I would communicate my shame or blame about the abuse. He would acknowledge my feelings or thoughts and gently push back.

He repeated, often, that the only person responsible for the sexual abuse was the abuser. While I now know this to be true, it did not feel true. I felt responsible. It felt like my fault – not partly my fault, but all my fault. This is one effect of having been groomed by an abuser. In addition, many in my religious communities expressed their beliefs that I was to blame in one way or another. My minister would not add to my feelings of guilt and shame.

Another minister offered me resources and support group information, while also giving me advice similar to this, “Whatever the abuser says, whatever he does, do not trust him until he has proven himself to be trustworthy over a very long extended period of time during which he has been focused only on receiving therapeutic help and exhibiting visible change.”

This may seem logical, but the default among many congregations is to believe the abuser when they express remorse and ask forgiveness. Through saying this, my minister gave me the freedom to push back against all the pressure I was receiving to just “forgive” and stay married.

He also had a unique suggestion that is a clear indicator that he is knowledgeable about trauma. The support group he believed would be most beneficial to me was a grief group for those who had recently experienced the death of loved ones. His reasoning was spot on. He told me that what I had experienced was like a death.

This echoed a thought I hadn’t shared with anyone at that time, that the person I was before was gone, dead. The trusting, hopeful, optimistic believer was shattered.

Someone new had emerged from that ten minutes abuse disclosure conversation. I now know this is common among people who experience trauma. There is a rift between the past and present with no hope for a future. He talked with me about all the loss I would be grieving, including the loss of who I was prior to the trauma. These insights and conversation were significant. They communicated hope.

Of course, there are other things they did that helped me survive that time, such as spontaneous phone calls just to check in, or stopping me in the hallway to give me a hug[1] and a word of encouragement. Yet, the above three areas were vital in supporting me through the first week when I was shocked, terrified, and floundering to regain my footing in my new post- trauma world.
—————————-
Reference
Salter, Anna C. (2003). Predators, Pedophiles, Rapists, and Other Sex Offenders: Who They Are, How They Operate, and How We Can Protect Ourselves and Our Children. New York: Basic Books.
—————————-
[1] When engaging individuals who have experienced trauma, particularly abuse, always remember to ask first before touching or hugging them. For those of us that developed PTSD, unexpected touch can be startling, and even feel violating, regardless of the intention behind the touch. 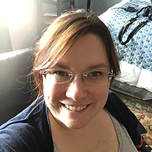 Maureen Farrell Garcia read voraciously, drinks ample amounts of tea and teaches writing at Nyack College in NYC. Her writing has appeared on various blogs and online magazines, including Christianity Today and Christ and Pop Culture.

WHAT I WISH I KNEW BEFORE I STARTED IN YOUTH MINISTRY: SELF-CARE