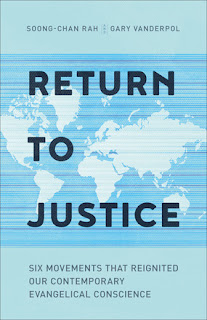 Some Christians go way out to fight for social justice. Others simply swing to other direction to talk a lot but end up doing pretty much nothing. In 1947, the late Carl F. Henry’s book The Uneasy Conscience of Modern Fundamentalism pretty much summed up the situation, where the general mood is distancing from the world and preserving the Church’s fundamental images. Henry’s conviction was moot, that the Church must walk the talk. They must engage the world in the manner that lives as salt and light to the world. Against a backdrop of a Church that tends to be apathetic to social justice matters, Henry placed much hope on an up and coming generation called “the evangelicals.” Since that call, the evangelicals of then require a new wake up call. This is where this book comes in to highlight not just one but six movements to update, to renew, and to revitalize the evangelical conscience toward social justice and biblical responsibility.

The first is the Power of Personal Story. Rah laments the divorce of social action and evangelism as white churches fled the city to the suburban neighborhoods. There is a need to re-integrate personal evangelism and social justice. John Perkins is an example of one who had done just that. Perkins has the unique position of growing up in a minority African-American community and also connected to a larger white community. He straddles both sides of the divide and is able to see the needs and nuances of both groups. He grew up without privilege and was able to understand in a very unique way the people who are marginalized in various ways.

The second movement is that of the Power of Personal Connection. Few of us are like John Perkins and therefore are unable to identify as much with his context. Most of us know about the global poverty levels, especially in third world and developing countries.

The third movement covers the story of World Vision as a ministry that deals directly with poverty in the world, where its vision is now about the eradication of poverty altogether. Compassion International is another ministry that works on holistic child development. These direct approaches have spearheaded lots of social missions and justice matters.

4. A Prophetic Voice of the Marginalized

The fourth is being a Prophetic Voice for the marginalized. Using the example of the Sojourners periodical, Rah traces the evangelical currents that speak for different perspectives of the justice ethos, namely the religious right and the progressive evangelicals, and situates Sojourners as an alternative voice. In its forty years of publications, it has touched on personal evangelism to political involvement; incarnational communities to countercultural prophets; toward an evangelicalism that engages rather than disengages.

The fifth represents the unique position of the African-American Evangelicals that deals with racism and ethnic justice matters. We learn that the issues are complex and cannot be tackled on simplistic measures. It takes lots of resolve, respect, and reconciliation to deal with these. Tom Skinner’s 1970 message at Urbana and his powerful personal story of conversion made both black and white communities wake up to the need of going beyond mere personal salvation towards the healing of fractious communities.

The sixth follows with the Latin American society that is predominantly Roman Catholic. It presents an alternative to the “atmosphere of suspicion and resistance” propagated by conservative fundamentalists and helps to bridge America with the global world. Both the Latino and African-American perspectives can give the wider evangelical circle to be more inclusive and adaptive to the challenges of social justice.

This book reminds us that social justice initiatives are happening all around us and it is not true that the Church had not done anything. It is also easy to accuse the Church of not doing enough. I think that it too simplistic a criticism. If one bothers to examine the complexities of world poverty, social injustices, and various challenges to the well-being of individual societies, the bigger problem is the lack of understanding of the problem and the lack of guidance on how to manage existing resources. Just as the target communities have contexts we cannot understand, the Church, in general, is also not equipped to channel or adapt its resources to help in appropriate ways. Of course, one can aim the blame at poor leadership or spiritual apathy. Playing the blame game would not help. What is more helpful is deeper understanding. This is what this book has done.

The wake-up call for the evangelicals had already been made since the days of Carl Henry. The movement still continues today, albeit in different forms. Different organizations will focus on different things. That is the beauty of a diversified evangelical community. No longer is it simply feeding the poor or giving money to the hungry. It is about education and equipping saints to do the work. No longer is it about helping other ethnic groups in lands far away. It is about being aware of neighbors and people of different color and culture. Moreover, with the global movement of people groups, we are going to have more diverse communities in the coming years. Being open to learn about other cultures is perhaps one of the best ways Christians can show grace.

These simple acts of consideration will go a long way to learn about our neighbors in our local places. In doing so, we can have a head-start in reaching out to similar cultures in far away places. While the title of the book is Return to Justice, I feel that the bigger picture is reconciliation with God and reconciliation with fellow people. If we are genuinely interested in doing this, we will go beyond simply fighting for justice toward the practice of love, justice, and mercy.

Dr. Conrade Yap is an Associate Pastor at Lord’s Peace Chapel on the south side of Vancouver. He received a Masters of Divinity from Regent College and completed his doctoral studies at Gordon-Conwell Theological Seminary. Dr. Yap reviews books for a variety of publishers including, Thomas-Nelson and NavPress. Find more of his work at yapdates.blogspot.com and booksaint.blogspot.com.

This post was originally published by booksaint.blogspot.com. This book was provided to Dr. Yap courtesy of Brazos Press and Graf-Martin Communications in exchange for an honest review. All opinions offered above are mine unless otherwise stated or implied.